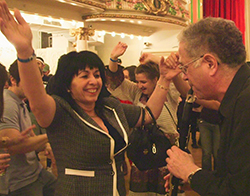 features Kasia Sokalla, David Golber, Gawain Thomas, and Henry Goldberg playing music of the Balkans. Not the loud and fast brass of Goran Bregović. Not the massive thirty-voice choir of Mystère des Voix Bulgares. Gogofski brings other great music from the Balkans; from the complex dance rhythms of Macedonia to the heart-wrenching Sevdah song tradition of Bosnia. Gogofski will play music for easily-done dances, while their dance leader pulls the crowd out onto the street.

Kasia Sokalla studied voice in her native Poland, and graduated with honors from the Berklee School of Music.

David Golber has been playing Balkan-style clarinet for decades. He speaks Macedonian, and has studied in the Republic of Macedonia with Risto Krapovski, Bajsa Arifovska, and others.

Gawain Thomas comes from a musical family, and began playing
accordion at an early age. He has studied

for years with Bulgarian maestro Ivan Milev, and is well-known in Boston's Balkan music scene.

Henry Goldberg is a true master of the Balkan drum tapan. When the Bulgarian group Kabile came on tour to Boston, they were traveling without a tapan player. Henry stepped in and played with them, seamlessly and completely in style.