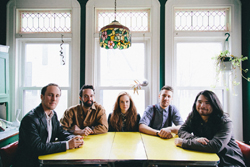 The Novel Ideas are a country folk quintet of friends from the great state of Massachusetts.  Featuring the voices of three different songwriters, band creates a blend of pastoral, harmony driven, and plaintive Americana music.  They spent the past year playing shows in support of their debut record, Home (April 2012), which was recorded in a barn in Jeffrey, New Hampshire.  Since releasing this record, they’ve shared the stage with Lord Huron, Little Green Cars, Caveman, and more. They are currently touring and working on their next record.