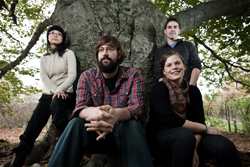 From the band’s self-titled 2007 debut up through 2011’s acclaimed, rousing This Time with Feeling, Boston’s The Grownup Noise have strived to bridge the gap between Americana and indie-pop. During that half-decade, the 5 piece ensemble’s performed with everyone from Kill Rock Stars sensations Thao with the Get Down Stay Down to acclaimed Canadian barnstormers Rock Plaza Central and folk troubadours the Guggenheim Grotto.

This past summer The Grownup Noise went on their 7th national tour and had the honor of playing an official SXSW showcase this past year with Tommy Stinson (of The Replacments and Guns and Roses).

Check out a few of their songs!
"Carnival" (full band)
"Everything Out" (acoustic)
"New Outsiders" (full band)