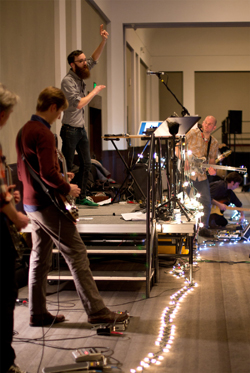 Kevin Micka has used the solo moniker Animal Hospital since 2004 to represent his solo musical output. Starting in the winter of 2011, a large ensemble version of his music was realized with two performances in Rhode Island and Massachusetts. The main vision behind these concerts was to have the audience located in the center of the room surrounded by a circle of musicians thus providing a very unique experience for each individual. These events generated very positive reviews and the project has since continued with 5 more performances including one at the Museum of Fine Arts and the First Night Festival on New Year’s Eve 2012 in Boston.

Watch this video and learn more about their unique sound!

And check out what critics have to say about Kevin and the Animal Hospital Ensemble:

"His ensemble is a testament to Micka's reputation as one of the city's most important sonic architects and proof of a unified scene in our underrated city."
The Metro - 7 31 2012
Click here to read more

"The surround sound you hear at a concert is ultimately technological trickery - the woofers in the back of a venue, the speakers hanging from the rafters. Sunday's performance by Animal Hospital Ensemble at the Massachusetts College of Art, meanwhile, was authentically immersive...The glacial chord changes and sumptuous white noise established a sense of silence and space, and at several transcendent moments, the band of 30 seemed to move as one living, breathing organism."
Adam Conner-Simons - The Boston Globe 12 6 2011
Click here for more

"Kevin Micka has long been Boston's most modest, capable and prolific sonic architect. Those of us who have followed his work know he's rarely one to hype up his own. Whether it be recording and mixing some of the city's best rock records, building microphones, repairing instruments, touring with friends' bands, or performing amazingly and intricately as his one-man-band, Animal Hospital, Micka has always been the city's quiet genius. In short, he is the hope and fulfillment of all that is good in our underrated town."
Interview with Nolan Gawron
Click here for more